Before  1988, three good friends decided to take a fishing trip off the shores of Costa Rica. Max Jennings, Bob Evans, and Charles Wahlheim were  forced to make an emergency landing at a deserted strip somewhere in the Costa Rican jungle when Evan’s plane ran low on fuel. Charles Wahlheim is quoted as reminiscing “"There were no buildings anywhere. People came out pointing guns at us, probably thinking we were drug runners or something like that. Fortunately, Max spoke fluent Spanish." 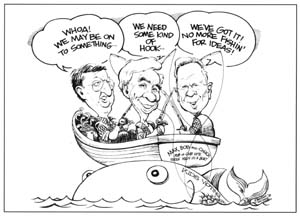 The story follows that the three men were lamenting about the most recent Arizona election and the low voter turnout in the back of the cab as they drove to get assistance to continue their fishing excursion, when Jennings asked the cab driver how many Costa Ricans typically cast their ballots in elections. The driver stunned his passengers when he replied, “Oh, about 80 percent.”

When questioned further, the cab driver shared that the schools in Costa Rica had a highly developed program focused on the importance of voting for classes from primary through high school. The curriculum included study of the electoral process, involved students in evaluating candidate statements and how to research issues.  The program also involved students accompanying their parents to the voting booth and casting mock ballots on election day. These votes did not count but were still tallied and published with the official results.

This  fishing party returned home and using the Costa Rica’s school program of voter education as model, a home state program was planned and their project was christened, “Kids Voting Arizona.”

In 2007, Kids Voting USA moved its main office to Washington DC., but kept its corporation status in the Arizona. For approximately two years, KV USA learned from operating its headquarters in the beltway where politics are the center of each day and not just election years. After this time, KV USA decided to move where the offices could be ‘centered’ in the country and operate under the guidance of the Kansas Press Association. The years in Kansas allowed KV USA to enhance the use of DoubleClick Democracy, an online voting tool, and strengthen awareness of the program and the affiliates through online blogging. Many thanks are owed to Rachel Willis and the Kansas Press Association for their efforts during this transition period. After a few years the Kansas Press Association passed KV USA to the care of KV Central Ohio who provided oversight until 2015. Key people who need credit for this transition include Suzanne Helmick, founding director of KV Central Ohio, Peter Hahn, KVCO Board Chair, and Jeff Cabot, Executive Director of KV Central Ohio.  Jeff Cabot is quoted as saying,

“Since Ohio is the quintessential battleground state, it seems appropriate for this national program of youth voting engagement to be headquartered here.”

The nation owes Kansas and Ohio a debt of gratitude for stepping up to assure this long standing program continued to serve students across the state during these transitions.  It was in early 2015, that Kids Voting USA found its way back home to Arizona under the administration of the Arizona Bar Foundation.   Hon. Helen Purcell, 2015 President of the Arizona Bar Foundation, led the effort of bringing KV USA back to Arizona,

“The Arizona Bar Foundation is proud to have KV USA come back to its roots, grateful to all the past leaders who kept this program strong, and proud to have millions of students learning the importance of voting through KV USA.”

Please see the About Us section of this website to learn more about KV USA today.